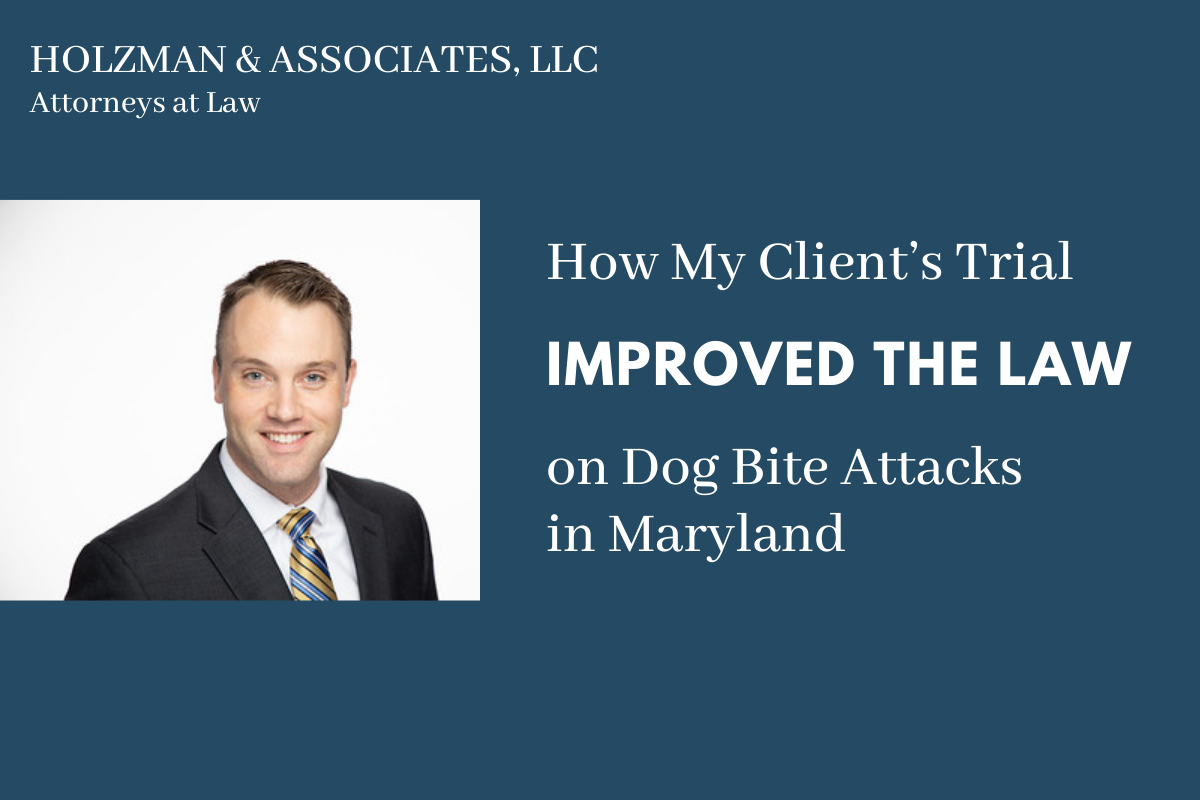 From Our Chief Litigator, Ryan Dickriede | One of the more interesting aspects of being a trial lawyer is working to make better case law. I am happy to have played a part in making Maryland’s laws on dog attacks a little better for the victims.

Two years ago, I tried a case in front of a Howard County jury in the Circuit Court. My client had been injured when a dog ran into her home and attacked her cat, seriously injuring her in the ensuing scramble. The dog was technically owned by the neighbor’s girlfriend, who was visiting the neighbor for the weekend, with the dog, as she routinely did. What made this case unique was that the girlfriend later declared bankruptcy and was therefore “judgment proof”. Therefore, the only avenue of recovery, in this case, was to pursue the neighbor directly, whom we saw as a co-owner of the dog, and who also was responsible for the dog’s actions. It should be noted that my client had amassed large medical bills from her injuries and needed a future corrective surgery.

Although the neighbor claimed that he was not the actual “owner’” of the dog, rather it belonged to his girlfriend who did not live there full-time, we thought Maryland law would be on our side because, in many situations, the law recognizes someone who “harbors” or “controls” a dog, as having responsibility for it. Many facts came to light at trial that strengthened our case:

In all common-sense manner of speaking, the dog also belonged the neighbor—not just the girlfriend.

However, this specific legal issue had never been directly addressed by the appellate court (see CJP § 3-1901). Meaning, the court had never ruled on whether a person who harbors a dog is liable for injuries if the dog gets loose.

After two days of trial and at the end of my client’s case, the presiding Judge decided not to allow that question to proceed to the jury and dismissed the case. My client was crushed. Trial defeats can be demoralizing, and the decision to appeal to a higher court is made harder not just by the financial cost of that endeavor, but also by the mental burden of continuing the fight. But thanks to my client’s incredible determination, and the brilliant appellate work of Timothy Maloney, a recent unreported opinion by the Court of Special Appeals provided vindication.

The Court of Special Appeals reviewed the case and agreed with our interpretation of the law, and with what should be common sense going forward for all dog bite cases: that someone who harbors a dangerous dog is responsible for it.

Although the opinion by Court of Special Appeals is “unreported”, which means it cannot be cited in any legal brief to a court, the fact that we were able to put together a good case that allowed an appellate court to address this issue, and to rule as they did, means that future victims of dog attacks will have a better chance of getting compensated for their injuries.

For more than 50 years, Holzman & Associates, LLC has obtained substantial verdicts and settlements for injury victims throughout Maryland. Ask around about us! If you believe you are entitled to compensation, contact us at 410-539-4222 for your free consultation.